*gives everyone a guilty look*

Yeah, it’s been a while. Sorry about that. I’ve ended up fairly busy with a bunch of things, including becoming part of the ASD Advisory Board of the recently formed Autism Canada, and also of the Canadian Autism Partnership Project. The latter of which was what let me come to Nova Scotia (see tagÂûght’s Blog: Leaving, On a Jet Plane; Two Wonderful Sisters; and Nova Scotia, How I Love Thee for the details and explanations).

The important part is that in coming here to Nova Scotia, I got to spend a great deal of time with my middle sister and her children, and meet her friends, and it’s been great. I’ve even tonight got to see my older cousin for the first time in ages.

Two Wonderful Sisters and Nova Scotia, How I Love Thee on tagÂûght mention some of the things I’ve done with my sister and her family, but I felt the need to expand on that somewhat here.

My sister loves crocheting, in much the same way I love writing. I like to create things with my hands – there’s going to be a post sometime in the next month and a half about all the things I’ve made at Sensory Art – plus I’ve got a few books on using crocheting in jewellery, so I asked her if she could teach me the basics. She very kindly did. And, in fact, here is my practice piece, which I used to get used to the three basic stitches: single crochet, half double crochet, and double crochet. I know it looks kind of weird, but hey – first practice piece. 😉

Aside from playing with my niece and nephews, I’ve also played a bit with their rats. (I miss Imber – but I am so glad that I decided to come. Mom and Dad are looking after her just fine.) My niece’s rat is named Joy, and my older nephew’s rat used to be named Ratty, but it was decided the first night I was here that Nibbler was a more appropriate name for her. (Both are females, and littermates.) So here are some pictures of me with Joy and with Nibbler. 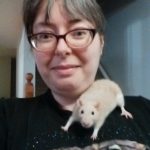 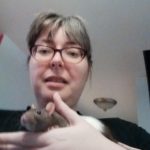 And this weekend, the kids are with their father, so my sister and I indulged. We went to the farmer’s market in Halifax this morning, then drove down to Mahone Bay and had lunch there, at the Mug and Anchor pub. Below are pictures taken from the parking lot of the Mug and Anchor, of the bay itself. 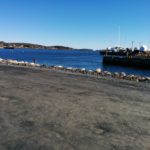 Mahone Bay from the parking in back of the Mug & Anchor, Picture 1 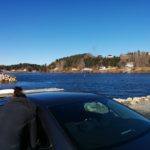 Mahone Bay from the parking in back of the Mug & Anchor, Picture 2; including sister’s car and back of her head

After we ate, we wandered over to Amos Pewter, where we saw some gorgeous stuff. We also had one of the crafters walk us through the process of casting, which was fascinating. I wish I had taken some pictures of that – one of the things he showed us was a demonstration of just how fast pewter solidifies and then melts again. He lifted a ladle of pewter from the melter and tossed it on to his work table, then picked up the piece, and it was completely solid. Then he dropped it back in the melter, and it was almost melting as it went in. Really fascinating.

We also drove down to Lunenberg (home of the Bluenose), but just drove around. (It was pretty cold today, so we skipped going to Peggy’s Cove.)

Then tonight, our cousin and a friend of my sister came over and we had a homemade sushi night. Yum! Our cousin made the tempura, and my sister, her friend, and I made and rolled the maki rolls. It was great! 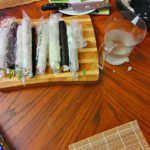 Maki Rolls for Sushi Night! I made some. 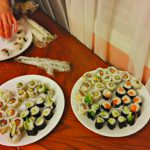 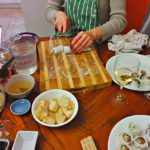 Sister cutting up maki rolls. Some cut up, and tempura tofu. 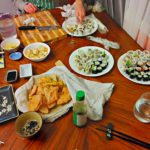 Tempura, maki sushi, chopsticks, and plates set out for our Sushi Dinner.

It was really delicious.

I am so, so glad I came. I really am. It’s been a wonderful (an au-some) trip. I got to make new friends, and meet my sister’s friends, and see her place, and see my niece and nephews and my cousin. I am never going to regret this trip. (I’ll make it up to Imber Tuesday evening. ;))