So, way back in 2009, I wrote a fantasy novel for NaNoWriMo. In fact, I wrote one and a bit – A Fox’s Fight (Book 1 of The Fox’s Journey), and the beginning of The Trickster’s Trade (Book 2 of The Fox’s Journey). It was fun; it involved a kitsune – Miyanobo Mayumi, or as we would say in the west, Mayumi Miyanobo – and a Detective Sergeant of the Metro Toronto Police Services Drug Squad – Darrel Greene – having to deal with a vicious new addictive drug that had been hitting Toronto’s streets… while Darrel didn’t believe in spirits, which was a problem, because the spirits were heavily involved.

But when I looked back on it to begin the editing process in 2010, I had a lot of problems figuring out what needed to be edited. I know that things do – I’m a good writer, yes, but I’m hardly perfect, especially with a first, or even “first and a half”, draft. The whole point of NaNoWriMo is giving yourself permission to not be perfect (at least, for those of us who would write anyway). So I let it drift, occasionally asking people to check it out.

On Tuesday, I asked Dad if he was interested in doing so. (I’d been poking about in my files, and figured it really needed to be dealt with.) He told me he’d be glad to, so I sent A Fox’s Fight over to him.

Tuesday night, Dad proceeded to inform me that it was my fault he was going to bed two hours later than he would have ordinarily, because he got so caught up in AFF. 🙂

His final verdict was that he really enjoyed it.

Which meant, I figured, that it was time to really look at it, and get serious editing done, preparatory to sending it out to publishers. (Thanks again, Stormy, for the offer to help me with the latter!)

So, it turns out that my first sending out is not going to be Search and Rescue (which I still need to finish the re-write on), but A Fox’s Fight. However, I don’t want to start sending it out until I’ve got at least the first draft of The Trickster’s Trade done, mostly because not all questions are answered in AFF, and it’s obvious, in the Conclude, that there’s more to come. I suspect that publishers would probably be more willing to buy a book that has a sequel if that sequel’s already got a first draft completed, rather than being “In Progress”, or even not started yet.

Which brings us to NaNoWriMo 2013, which is coming up in less than a month and a half now.

This November, I’m not going to let the (still not-happy) fact that I’m can’t join the TorontoNaNo meetups (being halfway across the continent will do that for you) keep me from winning. I’m also determined that I will not get sick at the beginning of the month, the way I have the past couple of years with both NaNoWriMo and CampNaNo; I’m exercising more (three times a week), and things are… not hugely less stressful, but I’ve been learning a lot about autism and how it affects me in particular over the last several months, as well as new coping mechanisms, so I suspect that should help.

It will also help that I do plan to go out to coffee shops… not every day, because I simply don’t have the money for that, but more that once a week… during November to get work done in a somewhat more social atmosphere than the house. It helps that I’ve got my driver’s license, and am confident driving on my own by this point.

Not to mention the fact that I’ve written one story with these characters already, and that definitely helps because my grip on them, on what they’re like, their personalities, and their personal histories, is already quite firm.

Yes, I’ve got some of TTT already written; but while NaNo likes you to start with a completely new novel, I’ve known people who have continued novels in one year that they wrote the previous year. I’m going to be doing the same (i.e. all my wordcount before Nov. 1st doesn’t get added in at all), only it was four years ago that I wrote the beginning of this one.

Anyway, just an update on the events of this week. Am pleased, happy, and near to bouncing with it.

P.S. Oh, and below are some images involving A Fox’s Fight! 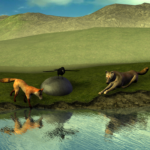 Fox, Raven, and Coyote: The Greater Spirits in The Fox’s Journey, about to interfere. 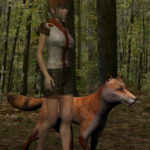 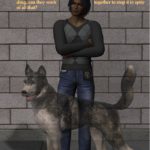 Second back cover for A Fox’s Fight. 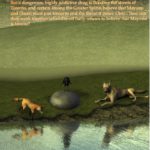 Preliminary back cover for A Fox’s Fight.