When I first found out that the Newfoundland Symphony Orchestra‘s Spring Pops concert (the final concert of the 2017-2018 season) was going to be science-fiction themed, including music from Star Wars, Star Trek, Battlestar Galactica (the original 1970s one, yay!), ET, etc. (which I think was back in November) I knew I wanted to go. So a ticket went on my Christmas wish list.

My parents were kind enough to get one for me, and I have been eagerly anticipating this concert ever since then. (Yes, it was definitely worth it.)

It’s been a long week for me – I was doing an Autistic Adults panel at the Canadian Autism Spectrum Disorders Alliance (CASDA) Summit in Ottawa this week – details will be posted on tagÂûght over the next few days – and got pretty much 4 hours of sleep each night, including being up at 2:40 am EDT this morning (it’s still Friday, because I haven’t gone to sleep yet) to get to the airport for my flights home. But it was so worth it.

I’ve got some pictures for you (sorry for the quality), that I’ll post as appropriate as I go along.

So, here was the program for The Final Frontier:

Zarathustra (Opening) – from 2001 A Space Odyssey

Star Trek Through the Years – themes from Star Trek, Deep Space Nine, The Next Generation: The Inner Light, Star Trek: Generations, and Voyager

Doctor Who: Through Time and Space – from Doctor Who

Adventures on Earth (ET) – from E.T. (The Extraterrestrial)

So, the first thing you need to know, is that a number of the members of the orchestra were in costumes. Several in Star Trek uniforms from the various iterations, and others in costumes that I didn’t necessarily recognize, but were definitely costumes. 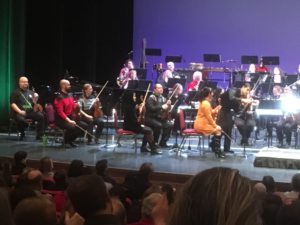 One half of the orchestra 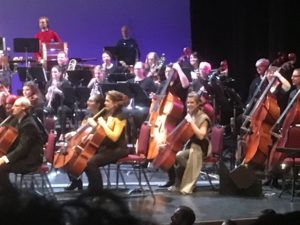 Other half of the orchestra.

Hugh Donnan, the Executive Director of the NSO, was there as Agent J from Men in Black. The narrator was Dale Gilbert Jarvis, a well known local author, folklorist, and storyteller, who came as The Doctor from Doctor Who. (I think the Fourth Doctor, because he said that the Fourth Doctor was the one he first saw, so was “his” Doctor.)

And we even had a special guest.

The music was absolutely wonderful. That alone would have made my night. But there were other things going on as well, that just kept adding to the delight of the concert.

The screen behind the orchestra was used to show scenes from the movies and television shows in question. The movies (except for the Main Theme and the Throne Room/End Credits of the Star Wars Suite) showed the title and then stills from the movie. Star Trek Through the Years showed the opening credits scene of each separate part, then selected active scenes from the show or movie in question. In Doctor Who: Through Time and Space, they showed the opening credit scenes of a number of the seasons (aka “series” in the UK). Space showed stills of the shows’ titles while each theme was playing. The Main Theme of the Star Wars Suite showed the beginning scenes of A New Hope, with a few cuts (it went from the very start to the battle between Darth Vader and Obi-Wan Kenobi on the Death Star). The Throne Room/End Credits of the Star Wars Suite showed from the destruction of the Death Star to the awarding of the medals in A New Hope, followed by the end credits… of the concert itself. And unlike during the Recitals 4 concert on the 8th, the visuals were not distracting at all for me, because it was all about a visual medium in the first place. (Sorry, but I did find the visuals during Recitals 4 distracting. I understood the purpose, but I can only concentrate on so much sensory input at a time, and my brain prioritizes visual input over all others.)

Now, some of the other delights: During the Adventures From Earth (ET), a kid dressed in a red hoodie (aka portraying ET) crossed the stage in front of the orchestra pushing the iconic bicycle. (Sorry, no pictures of that – I was careful not to take pictures while the music was playing.) The conductor/music director, Marc David, was given a brown trenchcoat to wear during Doctor Who: Through Time and Space. And he wore Vader’s face mask during The Imperial March (Darth Vader’s Theme) of the Star Wars Suite.

During the intermission, there was a costume contest, and both alcoholic and non-alcoholic Romulan Ale was available at the bar. (I stayed in my seat; my poor feet couldn’t take much more moving.) And before the music got started for the second part of the concert, the three finalists of the costume contest (as determined by… pretty sure it was Darnell Johnson – if not it was Darren Hann – from Sci Fi on the Rock, who were partnering with the NSO for this concert) were called up on stage and the winner was determined by audience (and orchestral) participation.

Not a great picture, I’m afraid – there are a couple of better ones on Twitter (like this one) under the hashtag #FinalFrontier – but we have, from left to right: Kylo Ren, the one whom I’m called Stormtrooper Suit (he was wearing a completely white suit with stormtrooper helmets printed all over it), and Indiana Jones.

Hm, what else was there? Oh, yes. During Star Trek Through the Years and Doctor Who: Through Time and Space, bassist Frank Fusari played the theremin. Turns out that’s what gives the eerie sounds of the Doctor Who theme, which is rather neat!

All in all, a wonderful experience. I just really wish they would release a CD of the concert! 🙂